“Duquesne – and Pittsburgh – lost an incredibly talented leader, teacher, scholar, author and lawyer today,” said Dr. Charles J. Dougherty, Duquesne University president. “His contributions here at Duquesne, as well as his service on numerous government, charitable and legal boards and committees have improved the lives of many over the course of his remarkable career.”

Dr. Murray was Chancellor and professor of law at Duquesne University. He died unexpectedly on Wednesday, Feb. 11, 2015, while still actively engaged as a teacher and scholar of Contracts law. Murray served as Duquesne’s 11th president from 1988 through 2001.

Law school dean, Ken Gormley, who was hired for his first teaching job at Pitt Law School by Murray in 1982, and then worked closely with Murray at Duquesne for the past 20 years, stated: “Chancellor Murray was still the best teacher in the building. He was a brilliant instructor who cared deeply for his students. He had a great sense of humor and a deep commitment to using the law for the good of others. He was also one of the greatest Contracts scholars in the world. It will be impossible to duplicate or replace him.”

Murray, who was Duquesne’s first lay president, brought a tradition of service to Duquesne and led the University during a period of sustained growth and progress, including new schools and programs. As a law professor, Murray won numerous teaching awards and wrote 26 books, several articles and won the 2013 lifetime achievement award from the International Conference of Professors of Contract Law for his life’s work. The hallmark of his scholarship is his renowned Murray on Contracts and Murray, Cases and Materials on Contracts. These books are used regularly in every law school in the United States; they are cited as an authority in federal and state court cases throughout America, including the United States Supreme Court. 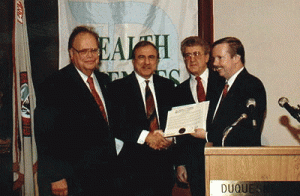