Mr. Rangos’ interest in Duquesne University pervades all levels of the Duquesne community. In addition to the Rangos School of Health Sciences and the Anna Rangos Rizakus Endowed Chair in Health Science & Ethics at Duquesne (in honor of his mother’s memory), he is also a consistent and longtime supporter of the Fr. Sean M. Hogan Scholarship Fund, a fund established by Fr. Hogan to help Duquesne students in dramatic financial need.

Fr. Hogan is a model priest who has touched many lives since he was first ordained to the Roman Catholic priesthood in 1967. He served the Church in Kenya from 1968 to 1975. During that time, he also helped maintain communication links with Irish missionary personnel who were working in war-torn Nigeria during the Nigerian Civil War (1967-70). He left Kenya in 1975; earned his master’s in Education at Duquesne in 1976; became associate director of Development at Duquesne in 1980, and executive vice president of Student Life in 1988, in which capacity he supervises staff dedicated to cultivating students’ moral, spiritual and academic values.

Alumni and friends helped him establish his scholarship fund in honor of his 60th birthday shortly after he was appointed official director of Student Life. All the interest generated from the scholarship endowment fund is awarded to Duquesne students in dire need on a case-by-case basis, as students present their needs during the course of the year (e.g., if a parent suddenly lose his or her job and a student is thereby rendered unable to meet his or her financial obligations to the school).

The Scholarship Fund issues several awards throughout the year, and continues to grow thanks to generous contributions from benefactors like Mr. Rangos, who has supported Fr. Hogan’s efforts almost from the beginning and continues giving to the Fund generously year after year. 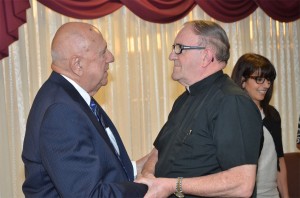