Resources From Within Attract Resources from Elsewhere

Major benefactors like Mr. Rangos excepted, IOCC has consistently managed to raise funds from throughout America’s Orthodox Christian community. Most parishes from each Orthodox jurisdiction have contributed over time, and continue to do so. The Greek Orthodox Archdiocese gave more than $3.5 million to IOCC between November of 2007 and February of 2008 for Greek wildfire relief, and its National Philoptochos Society, the largest organized group of philanthropic Christian women in the country, also makes substantial contributions each year. Just this past April, the Antiochian Orthodox Archdiocese of North America presented IOCC with a check of $150,000 for Haiti earthquake relief.

Securing large contributions from Orthodox Christian donors are vital for ongoing operations and philanthropic activities, Mr. Triantafilou explained, because it helps IOCC leverage more funding from and through its ecumenical partners.

“Whatever monies we’re able to raise right here in the United States have allowed us to leverage our relationships within the ecumenical family, and that allows to us to increase our impact,” he said.

By the time Mr. Triantafilou left Yugoslavia to take the reins in the Baltimore office in 1996, the value of projects in IOCC’s Yugoslavia portfolio was running between $5-6 million a year, which boosted the agency’s credibility with its European partners and the U.S. Government.

“Partnering with other ecumenical agencies eventually led to doing projects on our own. One of IOCC’s unsung heroes is the ecumenical family. I can’t say enough about the support they gave us when we were just starting out. They realized that, as an Orthodox Christian institution working in Orthodox countries, we were a logical partner. We had to earn our stripes not only as a new organization, but also as a new organization in that environment. It’s that support from the ecumenical family, WCC and ACT, then and now, which gave us, and continues to give us, a lot of leverage and unique opportunities,” Mr. Triantafilou said.

IOCC does not restrict itself to private American funding. It seeks European church funding and aid from the ecumenical family’s philanthropic community, and actively participates as an Orthodox entity in the ecumenical movement’s worldwide response to humanitarian crises.

Many of IOCC’s relationships with its partners go back to the agency’s beginnings. The Brother’s Brother Foundation – a Pittsburgh-based international charity which has helped tens of millions of people in over 140 countries, providing more than $3.4 billion in goods and services over the past 50 years – is among more than 70 organizations IOCC regularly partners with to help fund and fuel its programs. IOCC and Brother’s Brother met through a food program in Russia which both IOCC and Brother’s Brother were involved with. Brother’s Brother helped IOCC secure millions in donations from corporations in the Pittsburgh area and tons of supplies. Mr. Rangos played a very instrumental role in that effort.

“We’re still a major part of the ACT alliance, but we also work with Wheel Chairs for Humanity, Medical Teams International and others. The U.S. Department of Agriculture is also a big part of our history. We still try to engage them for contracts,” he said.

Reaching Out to Africa

As to IOCC’s efforts in Africa, Mr. Triantafilou noted, the agency has matured as an organization, and as situations arise, it responds accordingly to multiple crises “Our ultimate goal as a relief and development organization is to focus on agriculture, health and education, and how to present that from a public relations standpoint in order to maximize fundraising efforts. Ethiopia, which is largely an Orthodox Christian country, is the cornerstone of our program in Africa. That’s where we’ve been for the last seven years,” he said.

“We’ve been doing some work in Zimbabwe, Cameroon and Uganda, and now we’re conducting needs assessments so that we can make better decisions about how we can best deliver our services to those places, without over-extending ourselves or creating too much expectation ahead of time,” he said.

“It’s going to take a couple more years before we have a program in full swing. There’ always a lot going on. With 80 million people, Ethiopia alone is a massive country. The needs are so great, and the country is so big, that IOCC or any organization could literally spend all its resources there. Current projections estimate that Ethiopia’s population will hit 130 million within the next ten years, and the Ethiopian Church is easily half of that. There’s a very large Muslim population there also,” he added.

Many organizations have had a presence in Ethiopia for a long time, Mr. Triantafilou pointed out. Many programs are being run there by various organizations from all over the world – e.g., the U.N., WFP – so IOCC staff is working with the Ethiopian Orthodox Church and others to help fill the gaps. One of those gaps to do with a disease called podoconiosis, the root cause of elephantiasis (often mistakenly referred to as “elephantitis”).

Thousands of Ethiopian children are afflicted with this illness, which involves the grotesque swelling of limbs. The disease is contracted by walking barefoot on alkaline clay soil, which causes open sores and ulcers. Fortunately, podoconiosis is preventable. With the support of Philoptochos and other private donors, IOCC is distributing shoes and providing foot hygiene training to help prevent and treat this painful condition. “Kids get all swollen, and they can’t walk, but they have to work on their farms. It’s a terrible catch-22, so we’re working with Philoptochos and doctors from the U.K. to help combat this dreaded disease,” Mr. Triantafilou said.

IOCC has been involved with a number of health initiatives in Ethiopia since 2004, including an HIV/AIDS prevention and care program, which has reached 9 million Ethiopians through IOCC’s partnership with the Ethiopian Orthodox Church, and a disability outreach project in Addis Ababa which has assisted individuals through employment training, teaching life skills and elevating awareness among the community. 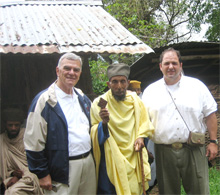