Giving Kids Another Chance at Life

Established in 1990 with a $15 million federal grant and a $3 million gift from Mr. Rangos, the original 100,000-square-foot John G. Rangos Sr. Research Center at Children’s Hospital of Pittsburgh (CHP) has provided state-of-the-art facilities in the Pittsburgh suburb of Oakland for scientists and medical professionals to collaborate on finding cures for childhood disease and disability. A second $3 million gift to Children’s Hospital of Pittsburgh helped establish the John G. Rangos-Massimo Trucco Diabetes Research Laboratory, which is located inside the Rangos Research Center. This state-of-the-art lab is a dedicated local resource used by scientists and medical professionals to find a cure for type-1 diabetes, more commonly known as juvenile diabetes.

CHP merged with the University of Pittsburgh Medical Center in 2001. In light of his generosity and longstanding dedication to CHP, the board voted unanimously to name its new research facility in the Pittsburgh suburb of Lawrenceville after him. At nine stories and 300,000 square feet, the new Rangos Research Center is widely considered a model facility by outside regulatory agencies. Studies performed there, under every major discipline, are as varied as the diseases the dedicated staff seeks to overcome. Up and running since the fall of 2008, the new Rangos Research Center has not only elevated the profile of Children’s Hospital, it has also helped Children’s become one of the world’s leading pediatric care centers, as the U.S. News & World Report rankings consistently reconfirm each year. 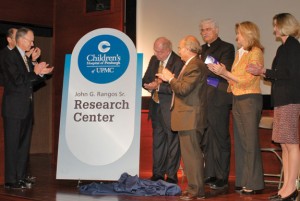 The unveiling of the new John G. Rangos Sr. Research Center at the New Children’s Hospital of Pittsburgh of UPMC Campus in Lawrenceville.