Mr. Rangos was born in Steubenville, Ohio in the summer of 1929. He grew up during the Depression with his mother and grandfather in northern West Virginia and Fredericksburg, Virginia. He became keenly aware as a child of the changes sweeping through his community as the hardships of the Depression gave way to the difficulties of World War II. He watched the men in his community ship off to war, while the women worked in factories to support them and their families. So from a young age, he developed a deep sense of pride in, and respect for, the collective collaboration and sacrifice for country, which he witnessed firsthand among his fellow citizens.

As a young man, Mr. Rangos attended the Houston School of Business. He interrupted his education to join the Active Air Force Reserve unit in Pittsburgh. Declining a first lieutenant commission in the Air Force Reserves, he opted for the Army, where he served from 1951 to 1954. During his service, he attended the U.S. Signal & Communications School at Fort Gordon in Augusta, Georgia. After completing courses in advanced communications, he entered a combat signal team in the Far East.

Mr. Rangos began his career with the Rockwell Manufacturing Company, where he earned the distinction of becoming the youngest general agent in company history. During the 1960’s, he formed several companies and pioneered technological advances in the field of waste transportation and disposal. The first company he founded – Chambers Development, Inc. – went public and merged with USA Waste, the second largest waste management company in the nation. USA Waste Services later merged with Waste Management Inc., the largest trash hauler in the country. His many innovative achievements include converting power plant boiler-ash into a useful component of cinder blocks and anti-skid material for highways. He was instrumental in inventing techniques for recycling bituminous byproducts and disposing sewage and sludge. He also developed techniques for liquid industrial waste disposal and created a resource recovery system that converts waste-generated methane gas into energy. Together with his two sons, he advocated the spoke-and-axle high-tech concept for regional sanitary sites, which resolved many environmental concerns.

Highly patriotic from a young age, Mr. Rangos has always been interested in government at all levels. He firmly believes citizens should participate in the Democratic process to the best of their ability, whether by voting, supporting programs or actively campaigning. His involvement in the political arena helped him form lifelong friendships, regardless of political affiliation. Over the years, he has assisted his preferred candidates and friends with advice and support.

Mr. Rangos supported John F. Kennedy during JFK’s successful bid for the Presidency in 1960, working for the Kennedy Campaign in Pennsylvania, Maryland and West Virginia, and serving as an advisor. For nearly 15 years, he was an advisor to his close friend, Senator Hugh Scott of Pennsylvania, who was a member of the U.S. Senate from 1959 through 1977 (Senator Scott served on the board of directors of Mr. Rangos’ public company until 1994). Mr. Rangos also served as an advisor to David Lawrence, who held office as mayor of Pittsburgh from 1946 to 1959, and as governor of Pennsylvania from 1959 to 1963.

Mr. Rangos has three children – John Jr., Alexander William, and Jenica Anne – and four grandchildren. He currently heads the John G. Rangos Sr. Family Charitable Foundation, and is former president and founder of the Congressional Medal of Honor (CMOH) Foundation, which supports the activities of the CMOH Society, the body of living Medal of Honor recipients.

After a storied career, Mr. Rangos has chosen to concentrate his efforts and energy on philanthropy. Among other organizations and programs, the Rangos Family Foundation has funded the Rangos Omnimax Theater at the Carnegie Science Center in Pittsburgh; the Rangos Research Center at Children’s Hospital of Pittsburgh; the Rangos-Trucco Diabetes Laboratory at Children’s Hospital; the Rangos School of Health Sciences at Duquesne University; the Anna Rizakus Endowed Chair in Health Science & Ethics at Duquesne (in honor of his mother); the Rangos Hall at Carnegie Mellon University (CMU); the Information Networking Cooperative Exchange with the Athens Institute of Technology, a collaborative master’s of science program in Greece thru CMU; the Rangos Family Foundation Building at St. Vladimir’s Orthodox Theological Seminary; the John G. Rangos Sr. Life Sciences Building in the new Science + Technology Park at Johns Hopkins University; John G. Rangos Sr. Professorship of Adult Medicine at Johns Hopkins; the Johns Hopkins Medicine (JHM)/University of Patras collaboration; and most recently, the John G. Rangos Sr. Awards for Creativity in Cancer Discovery at JHM, which has motivated the brightest young minds in the Hopkins community to search for and propose new ways to treat metastatic cancer.

Mr. Rangos was a delegate at the 1976 Democratic National Convention, and served as a delegate of the U.S. Olympic team for the 1980 Olympics (boycotted by several countries, including the United States). In this capacity, he advised members of American team against traveling to Moscow for the Games as a way of voicing American displeasure with communism and Soviet aggression in Afghanistan.

Mr. Rangos is very proud of his heritage. His ancestors in Greece and Russia played very active and significant roles in government, military affairs and social structures in those countries. And he has made substantial efforts through his programs and philanthropic activities to help modern Greece and Russia over the years, with a consistent eye to advancing and upholding the Orthodox Christian faith.

Dedicated to the Orthodox Church, Mr. Rangos is an Archon of the Ecumenical Patriarchate in Constantinople, the Church’s highest lay honor. He is also founder and former chairman of International Orthodox Christian Charities, which the Rangos Foundation actively supports, and he was a fundraising chairman for UNICEF. 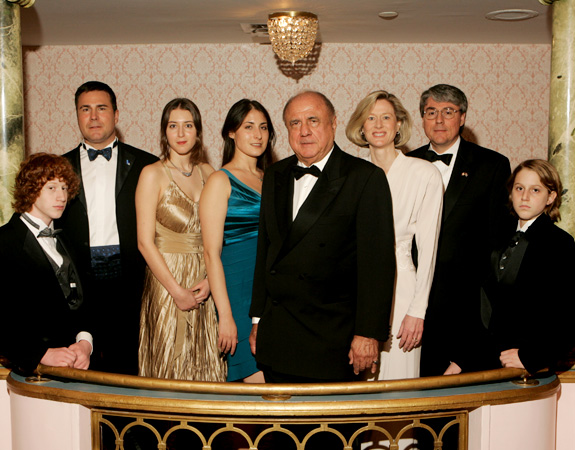